It is with a tinge of sadness that we announce the dissolution of the Moutons No More brand name.

Three years ago, we came together with the idea of producing regular content in Montreal on the theme of rationality. We hosted a number of stage shows and created many multimedia productions tackling pseudoscience, religion, and critical thinking. However, the upkeep on this work has been more demanding on some of us than anticipated. As such, it no longer makes sense to crowd out the local skeptical landscape with one more name with little value attached to it.

Television show producers are often accused of milking a profitable franchise well past its expiration date; we want to finish what we started while we are still proud of our recent accomplishments.

While Moutons No More as an entity is going away, we will continue to contribute to each other’s work as needed and to help each other out.

You can watch Guy Renaud’s videos on the intersection of Black culture and religion on his YouTube channel, https://www.youtube.com/channel/UC7lCu-ukFbCjlfuXpb5uXHQ.

And The Body of Evidence will carry on looking at the science-based medical landscape and debunking health-related pseudoscience at http://www.bodyofevidence.ca.

We want to thank everyone who has supported us over the years and hope you continue to appreciate our contributions, big and small, on the Internet and in person.

If you are bored this holiday season and want to catch up on health topics, why not listen to The Body of Evidence podcast archive? Here are some of the topics we tackled in 2016:

You can check out our website, where you will find videos and blog posts as well as the podcast, by visiting http://www.bodyofevidence.ca.

We would like to think that our brain is reliable in its thinking, but that is far from the truth.

Our mind adopts a number of cognitive biases that skew our decision-making process.

Buster Benson and John Manoogian III recently put together this amazing representation of the various known cognitive biases of the human brain, clustered by categories.

You may not want to memorize them all, but we should all take a gander at this illustration once in a while to remember how deeply flawed our thinking is. 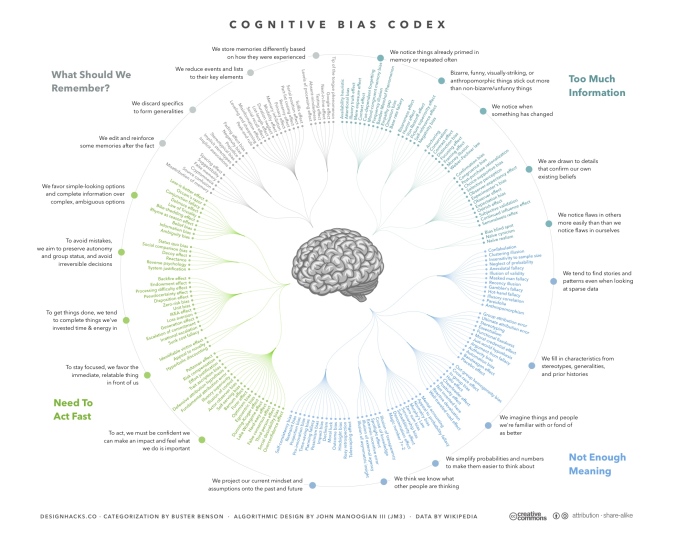 Here is the perfect blend of education and entertainment.

Canada is home to a number of critical thinking associations, nonprofit organizations, and charities. Their goal is to promote some subset of the rationality spectrum, which includes scientific skepticism, secularism, and atheism. Some of these organizations employ part- and full-time individuals, and so end up frequently asking for money to cover the cost of their operation. While I strongly agree with the need for official voices on matters of rationality, from the municipal to the national level, I have asked myself over the years if these organizations begging for money really deserve it.

I am not pointing the finger in any particular direction, nor am I interested in publicly naming names. I am however frustrated by what I perceive to be a general lack of leadership and an absence of meaningful accomplishments coming from these organizations which often bill themselves as preeminent megaphones for our concerns and values. It has made me wonder why we continue to support major groups that either continually fail to accomplish their goals or coast on doing very little. Some supporters are probably satisfied with this productivity and might accuse me of being too demanding. While I do have high expectations, I am trying to hold these organizations accountable to the very mission statements they have written for themselves. I have heard from fellow skeptics who support these groups simply because of what they stand for. But shouldn’t we support them because of what they get done? Why do we not always apply that same skepticism that makes us leery of claims and compels us to ask for evidence?

I have considered myself a skeptic for approximately seven years. Through my volunteering and spending time with various associations promoting critical thinking, I have experienced my share of disappointments. New initiatives, widely publicized, which quickly peter out. A rapid succession of incompetent figureheads. A guest on a speaking tour who ends up skipping a city because no one on the ground would volunteer to organize the event. An interview process for an important leadership position that can only be described as either spectacularly inept or bizarrely manipulative. A delay of over half a year in processing membership applications and renewals. And, at a more local level, an event cancelled a few days early because the organizers could not find the time to book a room in the two-month period that was allocated.

Some of these incidents are downright embarrassing when tied to a group run entirely by volunteers, but when money is involved, I would call them appalling. My assessment of the situation is that these organizations begin with the best of intentions, spurred onwards by the desire to do good and spread the knowledge gleaned from the luminaries in the field. Very quickly, however, the executives find themselves unprepared for the mission they have chosen and retreat into survival mode. The organization’s raison d’être ceases to be to promote, educate, and advocate; it now focuses on continuing to exist. Thus, these executives reach out to their members and ask for donations to ensure they will keep their job for the next year. Of course, these pleas for donations need to be justified and frequently include a list of yearly accomplishments. I have seen many such lists that have made me laugh out loud. Attending an event some other group organized is not an accomplishment, nor is passing along information on the work done by other organizations. The sound I frequently hear is of a spatula scraping the bottom of a barrel.

Can we afford to give skeptical organizations in Canada a pass simply because they espouse our values and pretend to do good work? What I have witnessed over the years is an apparent lack of accountability on their part. While this statement may not apply to all of them, I believe it applies to most of them. Support for skeptical endeavours should be encouraged, but when money is involved, we need to take a hard, critical look at how the people claiming to represent our views are spending their time.

The Body of Evidence looks at common medical misconceptions and aims to untangle the twisted messages around health and medicine. You can check out the website at http://www.bodyofevidence.ca. It is brought to you by Jonathan Jarry and Dr. Christopher Labos.

We have been so busy and I have not updated the Moutons No More website in a while. So, what has The Body of Evidence accomplished in the last two months? Here’s a partial summary:

We’re generating a lot of content that will be of interest to people looking for reliable information on health, science, and scientific thinking, so do subscribe to our website by going to http://www.bodyofevidence.ca and typing in your email address in the subscription box on the right.

The Body of Evidence: Medicine that tastes funny and science made easy.

A look back in history helps us get a better understanding of why some blacks are so tied to religions that are at their core of middle eastern origins.